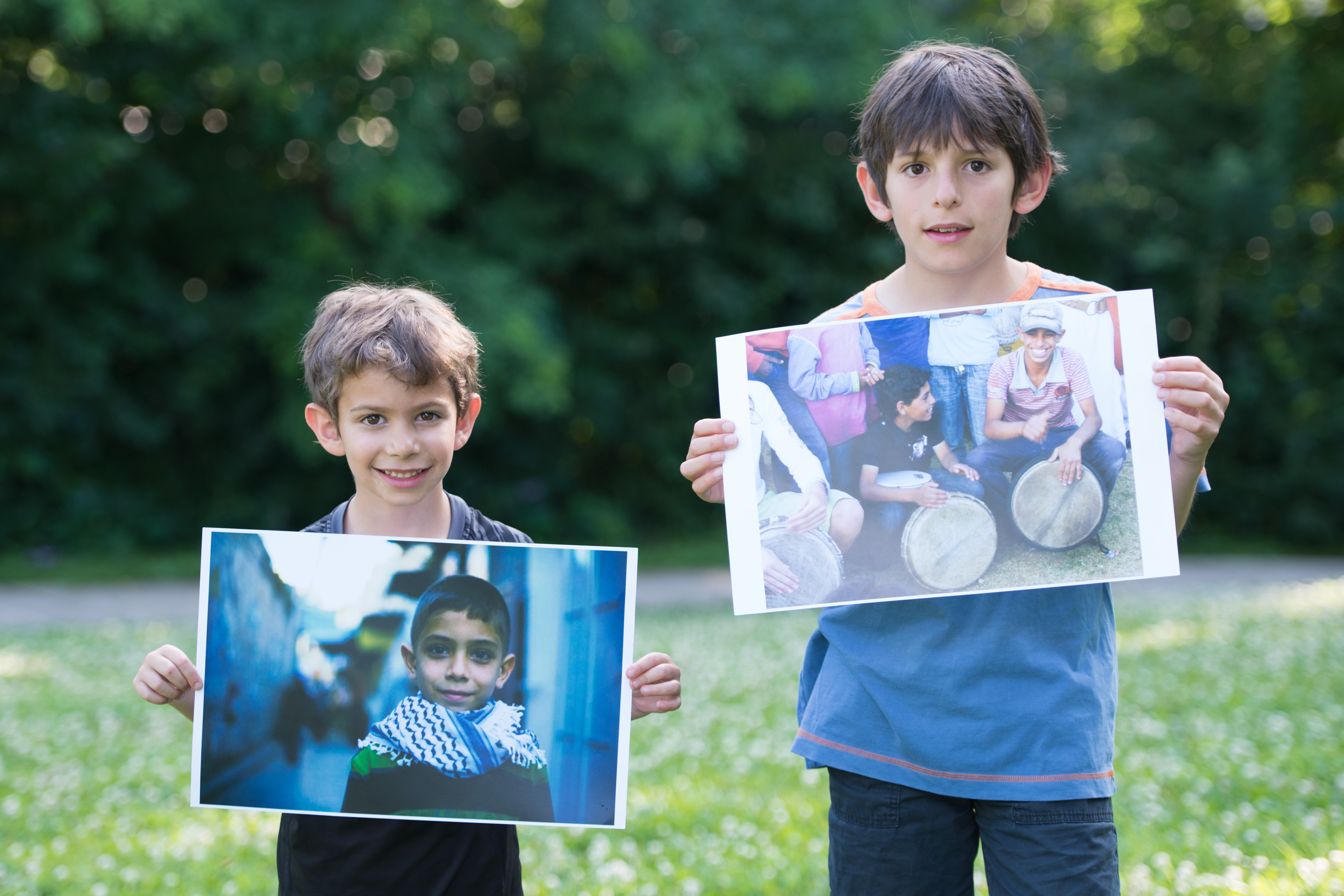 The night before Jacob is to meet with his estranged brother, Esau, the Torah describes a mysterious account of Jacob wrestling with an unknown being all through the night until dawn. The text does not tell us who this being is, but some commentaries suggest that it is Jacob’s conscience. Jacob had wronged Esau, and he needed to acknowledge his own responsibility in bringing bitterness and enmity into the relationship. He had to struggle with his own actions before he could turn his efforts towards reconciliation. After wrestling through the night, Jacob prevails and emerges from his encounter with the unknown being with a new name. He is now called Yisrael, which connotes a sense of struggle.

Yisrael is the name given to the Jewish people, and wrestling with moral and political issues is a fundamental component of Judaism. Jewish tradition affirms the importance of struggling with one’s conscience and engaging in heartfelt deliberation and discussion. The Talmud, a central and sacred text in Judaism, records the Rabbis’ debates over important issues in their society. When laws emerge from these discussions, they reflect the majority viewpoint, but the minority opinion is always preserved. This teaches that not only is there merit to both sides of an argument, but there is merit in immersing oneself in difficult conversations.

Jews have never spoken with one voice, and the debate over Israel and the Israeli-Palestinian conflict within the American Jewish community follows this tradition. Debates about Israel reflect complex expressions of Jewish identity, reveal the diversity of Jewish religious and political opinion, and stretch the boundaries of Jewish community. They reflect multiple viewpoints about who speaks for the Jewish community, how disagreement and dissent should be expressed, and which values are most important.

Most American Jewish communal institutions operate on the assumption that support for Israel is an essential component of Jewish identity. They may provide some space for differing opinions on Israeli policy, but this generally occurs within the framework of unwavering support for the state. In the words of one Hillel campaign, “Wherever we stand, we stand with Israel.” Jewish communal leaders often dismiss perspectives that they consider too critical of the state of Israel or too sympathetic to the Palestinian experience. Jews who challenge or criticize policies carried out by the Israeli government are accused of self-hatred or betrayal and are often excluded from communal conversations about Israel.

The field of Israel education both reflects and promotes these attitudes. An important objective in this field is to convince young Jews to identify with and support Israel. Educators send a variety of messages to their students about Palestinians, including that they do not want peace, are unwilling to compromise, or uniformly want to kill Jews. Rarely do Israel educators help Jewish students try to understand Palestinian perspectives, the human costs they have borne as a stateless people, and their hopes for themselves and their children.

Sometimes, especially with younger students, Israel education ignores the presence of Palestinians altogether and does not seek to help students understand that Palestinians play a central role in Israel’s history, culture, and politics. Many five-year-olds are capable of understanding that Jews, Muslims, and Christians live in Israel and the surrounding areas and that one in five people living in the State of Israel is a Palestinian citizen (Arab-Israeli) yet Israel is portrayed simply as a state for Jewish people. Virtually no Jewish materials exist that present complex Palestinian perspectives with the intent of helping American Jewish students understand Palestinian experiences.

Leaders in the field of Israel education in recent years have begun to argue that presenting a mythic view of Israel undermines the goal of generating support for the country. They argue instead that educators should present Israel with more depth and complexity, showing its problems as part of the educational process, in order to better engage young Jews and convince them to support Israel.

The extent of this kind of wrestling is limited, however. Much is still considered outside the bounds of acceptable discourse in the organized Jewish community, and although some leaders are encouraging a more realistic presentation of Israel, it is rare to find a program or communal institution that is committed to depicting Israel and its relationship with the Palestinian people with any real depth or complexity.

Splintering in the Jewish Community

Over the past twenty-five years, and especially in the past five years, deep rifts have emerged in the American Jewish community. The consensus that developed in support of Israel after the Six Day War in 1967 has given way to bitter disputes and internal divisions.

Israel education in its current form has exacerbated these divisions, because its basic assumption—that Jews should support Israel—excludes many Jews who question this premise and who wish to explore new paradigms of engagement with Israel for Jews in the Diaspora. Some Jews have begun to challenge the politics and practices of their communities, voicing dissident opinions about the requirements of a lasting peace. Often, however, they are dismissed or criticized for being “anti-Israel” or “self-hating Jews.”

Communal discussions about the Israeli-Palestinian conflict are often so acrimonious that many Jews have pulled away from the issue altogether. While they may have particular beliefs about the conflict, they will avoid discussing their views publicly or even with close friends. Some rabbis and Jewish educators also shy away from the topic because they fear that it will be too divisive. Some even fear that they will lose their jobs or risk future employment in a congregation or Jewish organization.

Some communities use structured dialogue as a means of addressing these deep divisions over the Israeli-Palestinian conflict. This can provide an opportunity for participants to express and listen to diverse opinions in a constructive manner. While dialogue can be a positive experience for adults, it is not usually the best approach for children and teenagers. Young people need opportunities for organized learning so that they can develop critical thinking and self-reflection skills in order to knowledgeably evaluate complex information and the variety of positions they will encounter.

This curriculum moves away from standard approaches to Israel education and proposes a different framework for teaching about Israel and the Israeli-Palestinian conflict. It emphasizes values rooted in the Jewish tradition as well as critical thinking skills. Its purpose is to help Jewish students engage, challenge, and critique ideas; to struggle with their identity and community; and to examine a broad range of Jewish opinions.

Educators can help their students struggle with Israel’s past and present and imagine new possibilities for its future. They can help them explore a Jewish identity that is not based on condemning or ignoring the Palestinian people but instead promotes new paths to coexistence and reconciliation. Educators can teach their students that they have a responsibility to work for fairness and justice for all people and help them create communities that respect the well-being and dignity of all people—Jews, Palestinians, and others.

Teaching about Israel is as important to Jewishness as learning prayer and studying the weekly Torah portion. This curriculum allows students to grapple with Jewish history and cultural memories of the Jewish past, explore the history and variations of Zionism, and understand religious and political differences within the Jewish community. It highlights the importance of studying texts, examining one’s values, and delving into the complex layers of Jewish identity. It gives students the tools they need to understand issues of importance in their own world and to become responsible Jews and global citizens.

This curriculum identifies five educational approaches to Jewish life that provide a foundation for the students’ learning:

These approaches provide a framework for substantive learning about complex issues. They allow students to explore difficult questions such as:

Young Jews are both eager and capable of exploring these questions. This educational approach can help them build a positive Jewish identity by demonstrating that Jewish education is engaging and open to real discussion and debate. It can inspire them to emulate Jacob by wrestling with themselves and their peers as they engage with some of the most important issues of their day.